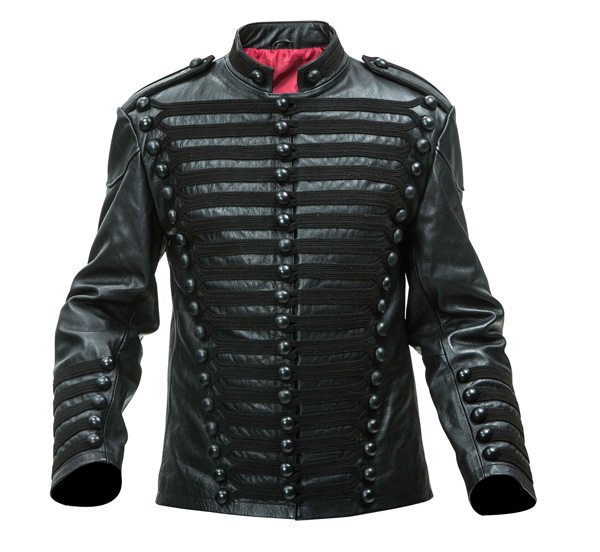 below info is from Wikipedia

The colourful military uniforms of hussars from 1700 onwards were inspired by the prevailing Hungarian fashions of the day. Usually, this uniform consisted of a short jacket known as a dolman, or later a medium-length “attila” jacket, both with heavy, horizontal gold braid on the breast and yellow braided or gold Austrian knots (sújtás) on the sleeves, a matching pelisse (a short-waisted over-jacket often worn slung over one shoulder), coloured trousers, sometimes with yellow braided or gold Austrian knots at the front, a busby (kucsma) (a high, fur hat with a cloth bag hanging from one side, although some regiments wore the shako (csákó) of various styles), and high riding boots (often Hessian boots). A sabretache, an ornate pouch hung from the belt, often completed the accoutrements.[16]

European hussars traditionally wore long moustaches (but no beards) and long hair, with two plaits hanging in front of the ears as well as a larger queue at the back. They often retained the queue, which used to be common to all soldiers, after other regiments had dispensed with it and adopted short hair.

Hussars had a reputation for being the dashing, if unruly, adventurers of the army. The traditional image of the hussar is of a reckless, hard-drinking, hard-swearing, womanising, moustachioed swashbuckler. General Lasalle, an archetypal showoff hussar officer, epitomized this attitude by his remarks, among which the most famous is: “Any hussar who is not dead by the age of thirty is a blackguard.”[17] He died at the Battle of Wagram at the age of 34.